There is a misconception that all of India is a bustling, hot, over-populated country. When you think of it you don’t think coastal, waters and the sea. Allow us to introduce you to the cool waters of Kerala… 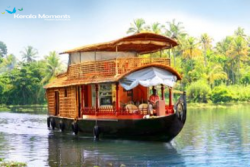 One of the most popular excursions in Kerala is cruising along the backwaters in your own private houseboat. The Kerala Backwaters are a network of interconnected canals, rivers and lakes. Amounting to more than 900 kilometres of waterways, the opportunities for exploring are literally endless. Originally used to transport rice bags, the waterways are crucial as they link remote villages to the mainland. Today, they are also a very popular tourist attraction allowing visitors to explore this beautiful part of the world in a wonderfully relaxed way on the waters of Kerala.

Periyar is the longest river and the river with the largest discharge potential (water flow rate ) in the state of Kerala. It is one of the few perennial rivers in the region and provides drinking water for several major towns. The Periyar is of utmost significance to the economy of Kerala. When you explore the lake a visit to The Periyar Wildlife Sanctuary should be on your to do list. Located in Thekkady the sanctuary is spread across an area of over three hundred square miles. 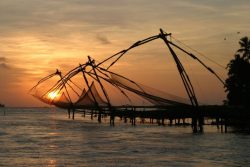 Cochin is a metropolitan port city in Kerala. Huge cantilevered fishing nets stand proudly on the waterline. Originally an accessory for fishing brought to Cochin by the Chinese, they are now a popular attraction for tourists. The sight of the nets suspended in mid air with a backdrop of the sunset is simply stunning. It is, undoubtedly one of the most photographed sights in Cochin. 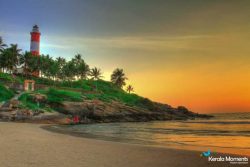 Kerala beaches are amongst the best in India. Some of the beaches remain relatively deserted whilst others offer bustling activity. You can watch the fisherman preparing their boats and nets, relax on the beautiful beaches and take in the scenery around you, or join in the beach activities. 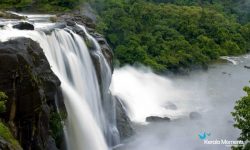 The stunning Athirappilly Falls are the largest and most famous waterfalls in Kerala India. It is nicknamed the ‘Niagara of India’ as when in her full glory boasts white foam and roars into the Chalakudy River.

Labeled as one of the best and most spectacular falls in India. The falls are situated on the Chalakudy River at the entrance to the Sholayar Hill range in the Thrissur District. Standing at an impressive height of 80 feet and 330 feet wide, these falls are a favourite destination for many and attracts tourists all year round. And also a nice refreshing place to cool down during Kerala’s hottest months!